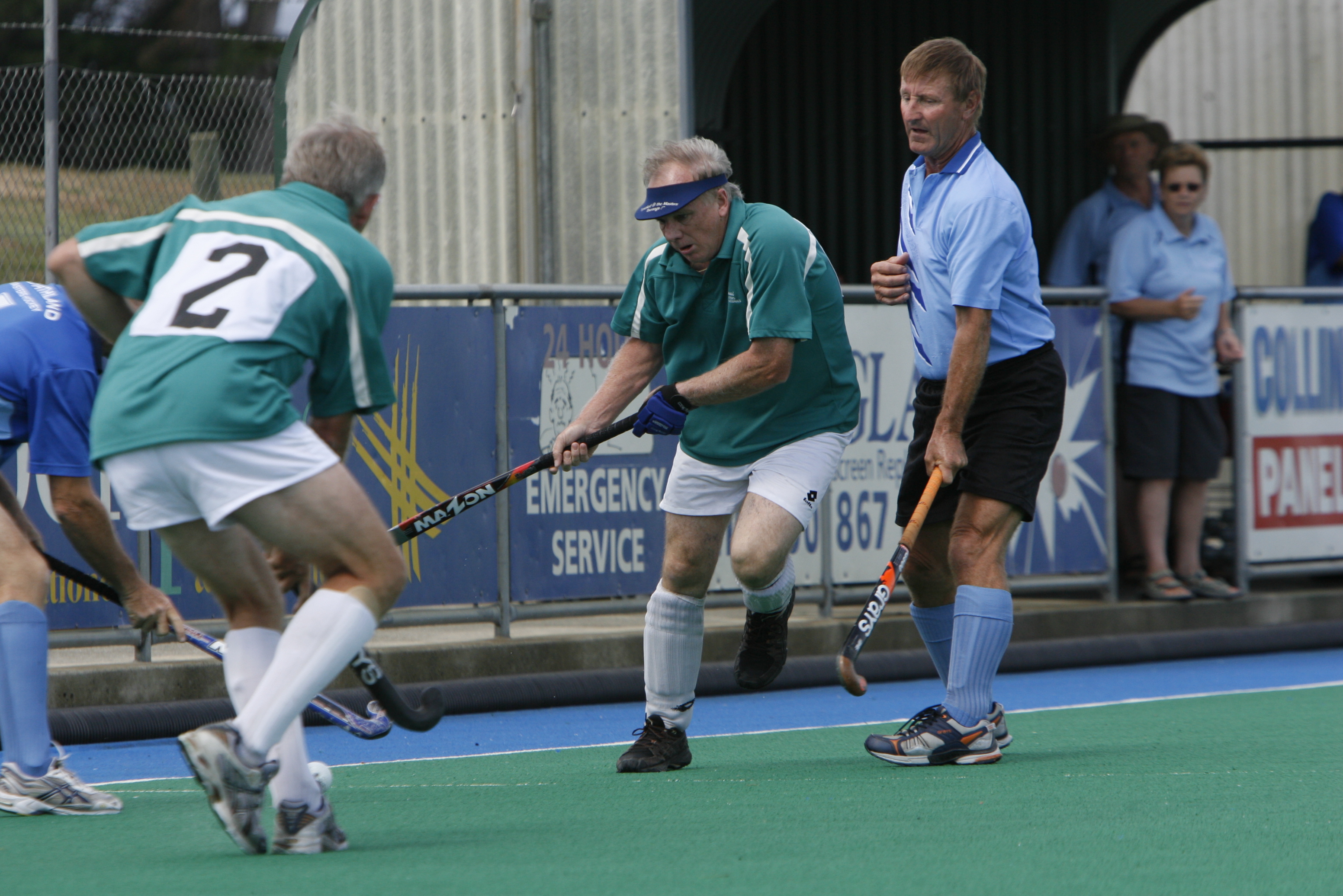 Bruce Becker’s love of hockey started in 1961 as an enthusiastic 9 year old boy at St. Anne’s Convent school in Manurewa, when he decided to join Southern Districts Hockey Club. He was a member of the club until 1975 and has been playing hockey ever since. Throughout the years that followed, he has made an outstanding and valuable contribution, both as a player, and in a wide variety of other roles, helping to promote hockey at all levels.

During his time with Southern Districts, he played with the men’s Premier team at inside left for 2 years, then later as a “floater” in the halves for another couple of years. He was also a member of the committee. These early years very much influenced Bruce’s enjoyment and love of hockey and he was encouraged to play by his father who sadly died in hospital, shortly before he first started playing in a team.

He proudly told me how much his father loved hockey and had played for Karori at club level, then later, in a Wellington Representative team. Maybe this is one of the reasons why Bruce felt motivated to follow in his father’s footsteps and why he has spent so much of his own time and energy over the years, helping and supporting other players, particularly encouraging the younger ones to get involved, while passing on his skills and knowledge of the game, both as a coach and mentor, also providing them with the opportunity to be part of a team, when it wasn’t always possible to join a school team. His tireless efforts have also involved spending much of his time organizing teams, providing them with uniforms, fundraising and being available to help out in many other ways.

From 1976 until 1988, Bruce organized and played for a team in Whakatane and was involved on the Central Bay of Plenty committee, responsible for doing the draw for all the local hockey teams. During those years, he also played representative hockey for Eastern Bays at both National and National Indoor level. In 1989, he played in the 5th Division for Southern Districts as a “fill-in”, another example of his readiness to help out and give support when needed. 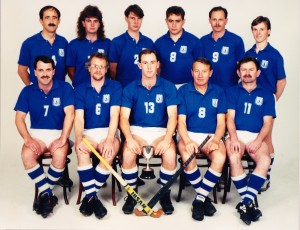 Since 1990, Bruce has been a loyal and hardworking member of Fraser Tech Hockey Club. He has played hockey all year round, including indoor and Summer League and has been a valued member of the committee since 1991. When he joined the men’s Reserve team in 1990, they were successful in winning the Championship that year, giving him a positive start, with many more enjoyable years to follow. Soon after this, he was helping to manage and coach the team, a role which lasted for 7 more years until 1997.Two years later, he took over a similar role as both manager and coach for the men’s C team, a responsibility he has continued until the present day. For anyone who has ever taken on the job of looking after a team, making sure that things are running smoothly from week to week, they will appreciate all the hard work and time involved. From 1998-2012, playing mainly at centre-forward, Bruce scored 115 goals in 242 games, demonstrating both his sporting ability and meticulous record-keeping. These days with his long experience over 52 years and having played in all the positions on the field except goalie, he is now happy to fill-in where needed.

Bruce was deservedly awarded Life Membership of Fraser Tech Hockey Club in 2005. In the same year, he also received a 10 Year Service Award from the Waikato Hockey Association. As well as the years spent looking after the men’s C team, he has been coaching a Fraser Tech High school team for the last 3 years, including managing the team himself in 2013. He also assists with a Hamilton Boys High School Social team, which his sons have played for since 2010, coached and refereed St. Peter’s Chanel Convent school’s Mini and Intermediate teams from 2000 to 2012, and was an assistant coach for the year 5/6 Waikato Rep team in 2009.

From 2009-2012, he acted as the Draws Convenor on the Senior Division committee for Waikato hockey, an important and time-consuming job, and still remains on the committee. Trying to describe and fully appreciate Bruce’s valuable contribution to hockey over the years is immeasurable. He was recently honoured at last year’s WHA Prize-giving, as Volunteer of the Year for his services to hockey, an award which he undoubtedly deserves. 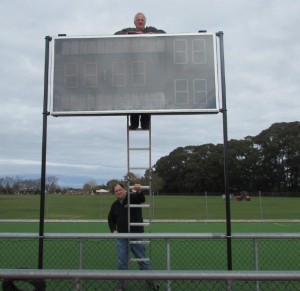 Bruce Becker and work colleague installing the scoreboards at GHC.

Bruce received this special award as a result of his unstinting efforts to build the WHA electronics scoreboards in time for the NHL Under 18’s tournament, held last July in Hamilton. With the valuable help of a workmate who designed the electronics, and a couple of women from work, they were under considerable pressure to complete the project in time.

Assembly began in mid-February, involving the installation of 5,800 LED lights into each scoreboard. It was an extremely labour-intensive process, and most of the work was done in their own spare time. A huge sense of relief was felt when the work was finally completed, fully-tested, operational and ready to go, just in the nick of time, only the day before the tournament was due to start.

They were very pleased at being able to stand back, with the satisfaction of knowing that it was a job well-done. For Bruce, this was a great sense of pride and personal achievement, one that you could literally describe as another “highlight” in his longstanding hockey career. 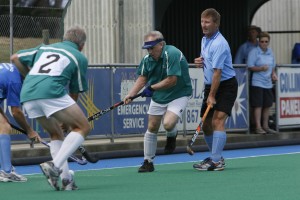 In recent years, Bruce has enjoyed the experience of playing in a number of NHL Master’s tournaments, one memorable game being a win in the final of the over 55’s National Masters Tournament in Hamilton in 2009. His most enjoyable opponents over the years were Otakiri in Whakatane, Te Awamutu in the Waikato and North Harbour.

Hockey has always been an important part of Bruce’s social life and in earlier years, he remembers having fun at the Indoor Nationals in Palmerston North, in the Ophonga 5-aside, playing in Whakatane and Hamilton in the early 90’s and at the 7-aside in Matamata, when he was in his early 20’s. He has also somehow managed to find the time to play darts competitively in Hamilton and Whakatane from 1984 -95 and took part in a Post Office tournament in Hastings, reaching the semi-finals in 1987.

Bruce is a quiet, fairly reserved person but he has remained positive and determined in his outlook, prepared to take the rough with the smooth. His many experiences and love of hockey over the years has carried him forward and given him a valuable insight, one which has helped him to overcome any “ups and downs” along the way. He understands the importance of having the right attitude and a sense of loyalty when you’re part of a team, also being prepared to work hard to develop the basic skills of hockey and last but not least, to enjoy playing.

Many people have benefitted from Bruce’s tireless efforts both on and off the field and he truly deserves the recognition for his outstanding contribution to hockey. He is a person who can always be relied on to turn up and get things done. Congratulations, Bruce!! May you continue to enjoy and participate in hockey for many more years to come.