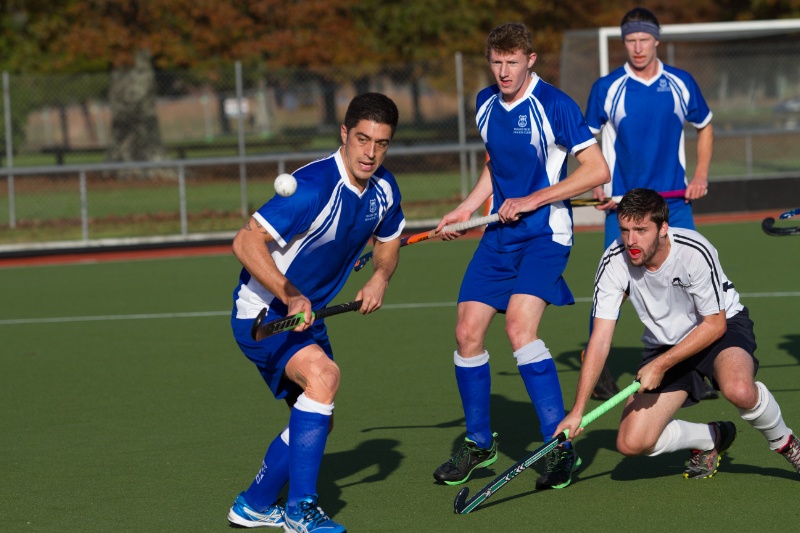 In the Men’s Matches; Aber Old Boys retained the DB Sports Shield seeing off the challenge of CBD University. The students came out blazing and went ahead through a Wade Guthrie field goal. Old Boys stepped up the pressure to equalise through a low drag flicked PC to Gareth Nuzum. Both sides were dealt blows with Nuzum being carded and University’s Abir Mukherjee dislocating his shoulder. In Nuzum’s abscence Old Boys used a PC variation to good effect with Mike Petherick converting to give his side the half time lead. Kyle Ostenfeld and Nuzum scored two successive goals for Old Boys and looked to have wrested the game away from the students before Brook Daly pegged one back. Petherick scored his second and Nuzum completed a hat trick to seal victory. Guthrie had the last say for University in their 6-3 defeat.
In the match of the day, Suburbs led Fraser Tech early on with Aaron McNabb carrying on where he left off last week with a well taken field goal. Chris Harding added a second before the break to gift Suburbs a handy lead in an otherwise evenly contested match. Jono Bloor added a third for Suburbs In a bizarre second half that saw goal keeping brothers Dean and Craig Armstrong both leaving the field in separate circumstances. Dean, was deemed to transgress by kicking the ball outside the circle and received a 5 minute suspension. From the ensuing PC, Tech’s standout player Alec Wilson got his side back into the game. Elijah Graham further reduced Suburbs lead easily beating fill in goal keeper Tom Gilby-Todd. Craig Armstrong correctly showing his knowledge of the rules was vociferous in objecting to play being stopped whilst his brother Dean rekitted at the end of his suspension. His frustration was further compounded when Leon Teao slotted in Suburbs’ fourth goal prompting Coach Sommerville to substitute him in search of all out attack. The ploy nearly worked with Wilson again reducing the margin to one but Suburbs held onto the 4-3 lead to earn their second straight win.

In the women’s matches; Fraser Tech and one of their key playmakers Kate Kernaghan were on fire in destroying PR Carter Contracting University B 11 nil. Kernaghan scored 5 field goals and two PC conversions in an impressive haul. Acacia Kelson grabbed a hat trick and Danielle Fletcher completed the rout. Tech now top the standings on goal difference.
Suburbs Women’s side stole the match on the more fancied Te Awamutu side with Holly Finn and Renee Ngatai both converting first half chances. Te Awamutu were missing a few of their older heads but Helen Rhjan reduced the lead before the break to keep Te Awamutu close. Suburbs player/coach and ex Black Stick Kate Mahon chose an opportune time to score her first goal of the season and restore her sides two goal cushion. Michaela Berry sealed the 4-1 win with a late goal.
In the Women’s match up of the day, previously unbeaten sides Hamilton Old Girls and Storage King University squared off with the GB Sports Shield also up for grabs. Better efficiency at PC time proved fruitful for the students with Chloe Stevens and Jess Turner both converting from the set piece to take a handy two goal lead into the break. Olivia Scotland increased University’s lead to three with another successful PC variation to open the second half scoring. Some superb defending by Old Girls kept the students scoreless for the remainder of the game and responded themselves through Nadine Butcher. The 1-3 loss see’s Old Girls slip to third on the standings on goal diff behind Tech and University respectively.