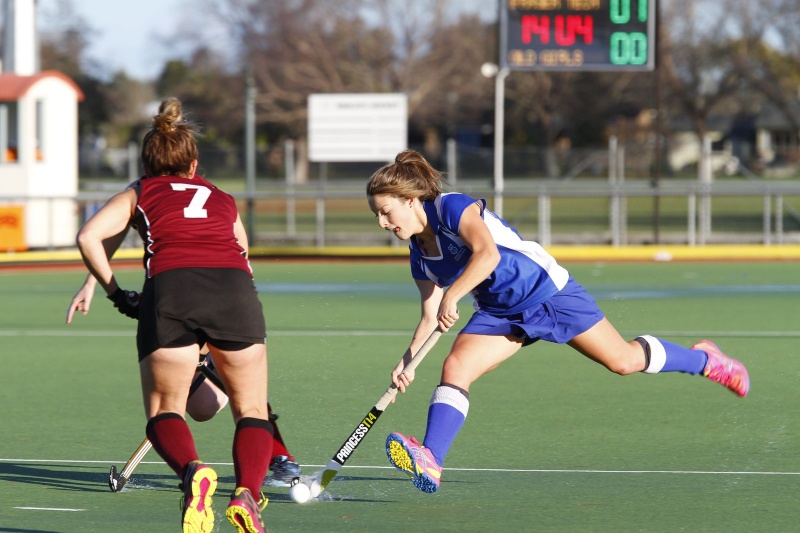 Twenty one goals were scored in vastly contrasting matches during the Premier Men’s Hockey round completed Saturday. Aber Hamilton Old Boys set the scoring tone for the day when they demolished Ecolab Te Awamutu 9-1 with a much improved all round display. Looking to avoid a repeat of last week’s poor start against Tech, Old Boy’s never let Te Awamutu into the game scoring five unanswered first half goals. They were rewarded early when Richard Petherick opened the scoring from a PC and maintained a steady procession of scoring with Troy Smith adding the second and brothers Chris and Matt Rees-Gibbs both taking their scoring opportunities with the half closed off when Declan Keaney converted. Despite their comfortable lead Old Boy’s kept up their procession of goals with Kyle Ostenfeld and Mike Petherick making it seven different goals scorers from seven goals. That trend ended when Chris Rees-Gibbs and Keaney added to their first half strikes and double digits appeared a reality. Te Awamutu had the final say in an otherwise poor display with Michael Atkin scoring just before the final whistle. The win also sees Old Boys oust Suburbs at the top of the table on goal difference with the latter having the bye. Old Boys also regain the GB Sports Challenge Shield which they also took off Te Awamutu in their first round clash.

University joined Old Boys and Suburbs on nine points which a dramatic 6-5 win over Fraser Tech in a closely fought goal fest. Tech dominated the opening stanza converting their first PC through an Alec Wilson drag flick and went two up when Peter Cathcart latched onto a loose ball after the next PC broke down. Immediately from the restart the Tech defense passively watched on as University inter passed into the circle where Tony Hopping slotted home to reduce the lead to one. Keagan Payne briefly gained parity for the students with a deft reverse strike but like Tech had done before them, University defenders were caught napping with Jimmy Linehan benefiting to snap off a shot to gift Tech a 3-2 half time lead. The students competed well after the break and a clever PC variation finished off by Hopping drew them level again and they then went ahead with some more poor defending from Tech allowing Javant Dhanje time to shoot accurately for a 4-3 lead. Linehan was again on the score sheet for Tech to level the scores but a double blow by Wade Guthrie and Brook Daly gave the students the winning edge. A late strike by Sam Holmes gave Tech a glimmer of hope with time almost up but they could not find an equaliser and sit fourth on the table.

In the women’s match of the day front runners Fraser Tech looked in ominous form early in the match and took the lead through a clever PC variation finished off with a reversed deflection from Amy Williams. Anita Hope in goal for Old Girls was called upon to make some telling saves and she showed she could be a contender for higher representative honours with some excellent timed challenges to keep the Tech strikers scoreless for the rest of the half. Tech looked to have scored from a goalmouth melee but with some excellent communication between Umpires the goal was disallowed. Tech’s disappointment was short lived when Tess Warren added to Tech’s lead with a well worked field goal to open the second half scoring. Tech’s youngsters upfront were proving a handful but solid midfield defense from Susan Johnson combined with Hope’s outstanding anticipation kept them at bay for the remainder of the match. Helene Barron finished off a team goal after excellent inter-passing amongst the midfield. The loss drop Old Girls 3 points behind Tech and University at the top of the table with four games remaining.