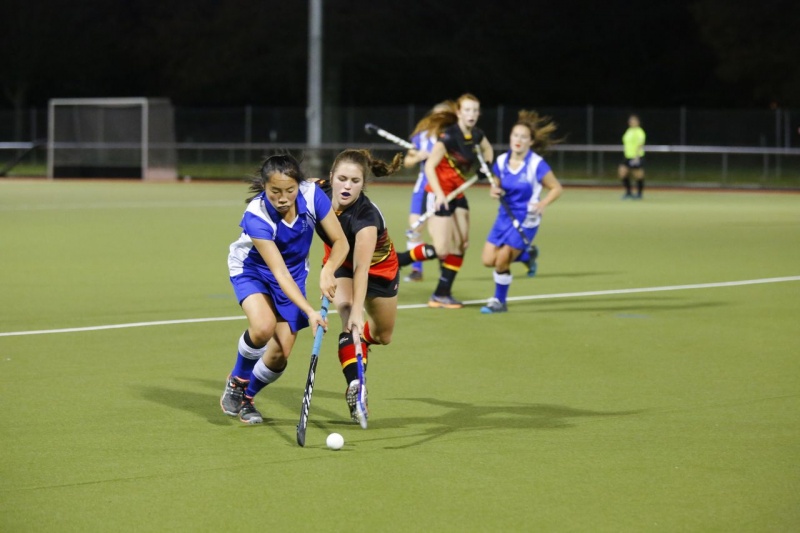 In women’s matches:
Fraser Tech imposed excellent pressure on Storage King University from the outset. Last week’s goal scoring hero Kate Kernaghan continued that form to open the scoring. The student’s efficiency at PC time was again shown when Chloe Stevens leveled the scores but Acacia Kelson restored Tech’s lead prior to the break. Deborah Yung extended the advantage when slotting a penalty stroke and Monic Bothma completed the scoring and ensured that University’s hold on the GB Sports Challenge Shield was a brief one.
Hamilton Old Girls and Te Awamutu fought out a cliff hanger with Old Girls eventually pipping the plucky young Te Awamutu side 4-3. Te Awamutu took the early initiative through an Emma Hope conversion but Old Girls Jeanna Richardson, still recovering from injury, replied in kind. Hope restored the lead briefly before Old Girl’s strikers Helene Barron and Karen Matthews both threw their bodies on the line with the latter getting the final touch in to level the scores at half time. Te Awamutu started better in the second stanza with Mary-Rose Scanlon restoring the one goal lead. Richardson showed her scoring prowess to again level the scores and Barron was richly rewarded for her high work rate to seal the win for Old Girls with a deftly judged strike.
Suburbs jumped ahead of Te Awamutu into fourth place when securing a 5-1 win over PR Carter Contracting University B. Holly Finn, Renee Ngatai, and Julena Phillips all scored first half goals replied to by a sole Brodi Muschamp conversion. Finn and Ngatai both added to their first half goals in sealing the win.

In Men’s matches:
Suburbs Men are now the only unbeaten side in either Premier competition, making it three wins from three, when defeating the more fancied Aber Hamilton Old Boys unit. Old Boy’s, although bolstered by the return of Black Stick defender Richard Petherick, were always chasing the game and were down early after a Leon Teao strike. Gareth Nuzum equalised for Old Boys with a drag flicked PC but his side went behind prior to the break when Jono Bloor scored. Aaron Barnsdall drilled in a rare PC hit which went like a rocket low to the keepers right. Petherick kept Old Boys in the contest with a drag flicked PC of his own. Despite Old Boy’s having the better of the closing stages, Suburbs player Coach Dean Armstrong was ninja like in goal to thwart Old Boys and wrest the GB Sports Challenge Shield from Old Boys who had held it since the opening round. The win see’s Suburbs alone on 9 points at the top of the table and they next play bottom placed Te Awamutu who had a tough day against CBD University in the other Men’s match. The sides were locked up Nil all at the break with neither side looking threatening. Wade Guthrie broke the stalemate early in the second spell for the students with Jitesh Sima adding a second from a PC. With the game winding down the students wound up a gear and slotted three late goals, a brace to Ryan Hall and the closing score to Tony Hopping.